How to Perfectly Roll a Garden Hose on a Reel

Freeing your lawn from clutter helps to maintain the beauty of your garden. That meters-long of topsy turvy water tubings can be an utter eyesore, easily taking away the pleasant and relaxing ambiance of your garden. Hmmm, your plants deserve more attention over that one heck of a mess! Thank heavens for the invention of hose reels! (Insert angels singing). But, have you ever wonder about how to roll up a hose on a reel?

What is a hose reel?

A hose reel is a simple gardening tool that helps you tidy up those long and winding hoses. Apart from that, it also plays a significant role in maintaining the quality of your hoses. Winding in your hose in reels prevents the tubing from getting weirdly twisted. Take note that such kinks are the primary culprit that can cause damage to your hose. We wouldn’t want that now, would we?

As simple as the reels may be, though, you may still have some questions over the use of this device. For example,  it is important to know the correct way to roll your hose in the reel. This will ensure that you get a snuggly and evenly-spaced winded tubing.

In this article, we will discuss the techniques on how to roll  hoses in reels perfectly. These strategies are simple yet work like a charm every time. So, bid goodbye to kinks and wave hello to smooth and perfectly rolled hoses!l

Step #1: Disconnect the hose from the water source

This is the primary step that some users tend to neglect most. It is important to disconnect the hose first from the faucet. This will prevent any sort of restriction from both ends of the hose. Moreover, this also helps it move more freely as you manipulate it to roll in the reel.

Speaking of disconnection, it would also be a good idea to detach the hose head’s from your hose. This will protect your hose’s head from getting damaged.

The process of reeling in the hose can cause your attachments to be dragged and toppled. Thus, it is likely prone to get scratches or may even break if dropped too hard. So for safety, it is best to remove it from the hose first before rolling.

After disconnecting all attachments, try to straighten the tubing as smoothly as possible. Do this on the entire length of the hose if your area allows. This step enables you to untangle all possible twistings even before you start to roll in the reel.

If space is an issue, you can try to make large loose loops instead. This will still help you release the tangles without occupying too much space.

How to roll a garden hose in a manual reel? 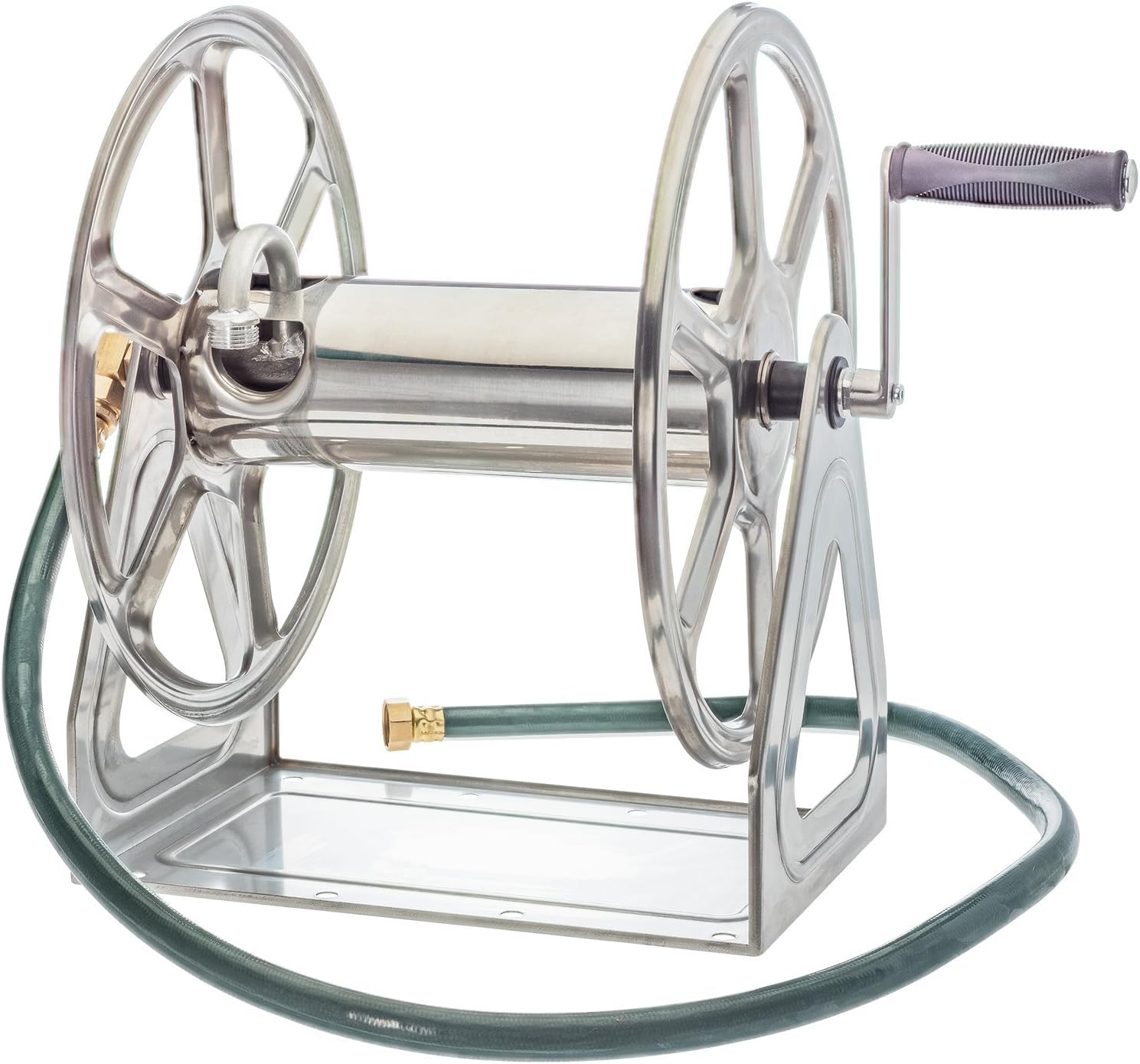 Garden hose reels come in different variations. But, the most basic and inexpensive type is the manual hose reel. Manual hose reels are often referred to as hand crank reels. They are called so because it comes with a handle that users physically turn to operate.

After you have prepped your hose using the three basic steps above, you are now ready to roll it in the manual hose reel.

Hose reels can either be designed for right-handed or left-handed users; how nifty! Function-wise, there is no difference between the two models. It is just more of a convenience matter. Of course, it would be more favorable for any user to have the crank positioned onto the side of its dominant hand.

Why is this significant?

A manual hose reel requires physical effort to operate. And as we may already know, our dominant side is more dynamic than the other. That said, it is stronger and more effective in winding the crank. Unconsciously, it is much more comfortable for us to exert more labor in our dominant hand too.

Depending on which side of the reel the crank is, the hand closest to it will operate the handle. Meanwhile, the other free hand will serve as the hose’s track guide.

For example, the reel’s crank is on the right side. The user’s right hand then will facilitate the turning of the handle. On the other end, the left hand will make sure the hose will not twist or kink whilst it is being rolled in the reel.

To create your base layer, lead the tip of the hose to the leftmost or rightmost side of the drum. Guide it to roll in the drum as the other hand turns the crank. Continue doing this until the rolled hose fills the entire horizontal surface of the drum. This first layer will serve as the base of your roll. So, it is important to form an evenly-spaced and tightly-coiled hose.

Once the base layer reaches the other side, continue to wind the hose to fill in the next layer. But this time, the direction of coiling should be towards the opposite side. Do the same process for the succeeding layers until the entire length of the hose is rolled into the reel.

How to roll a garden hose in an automatic reel? 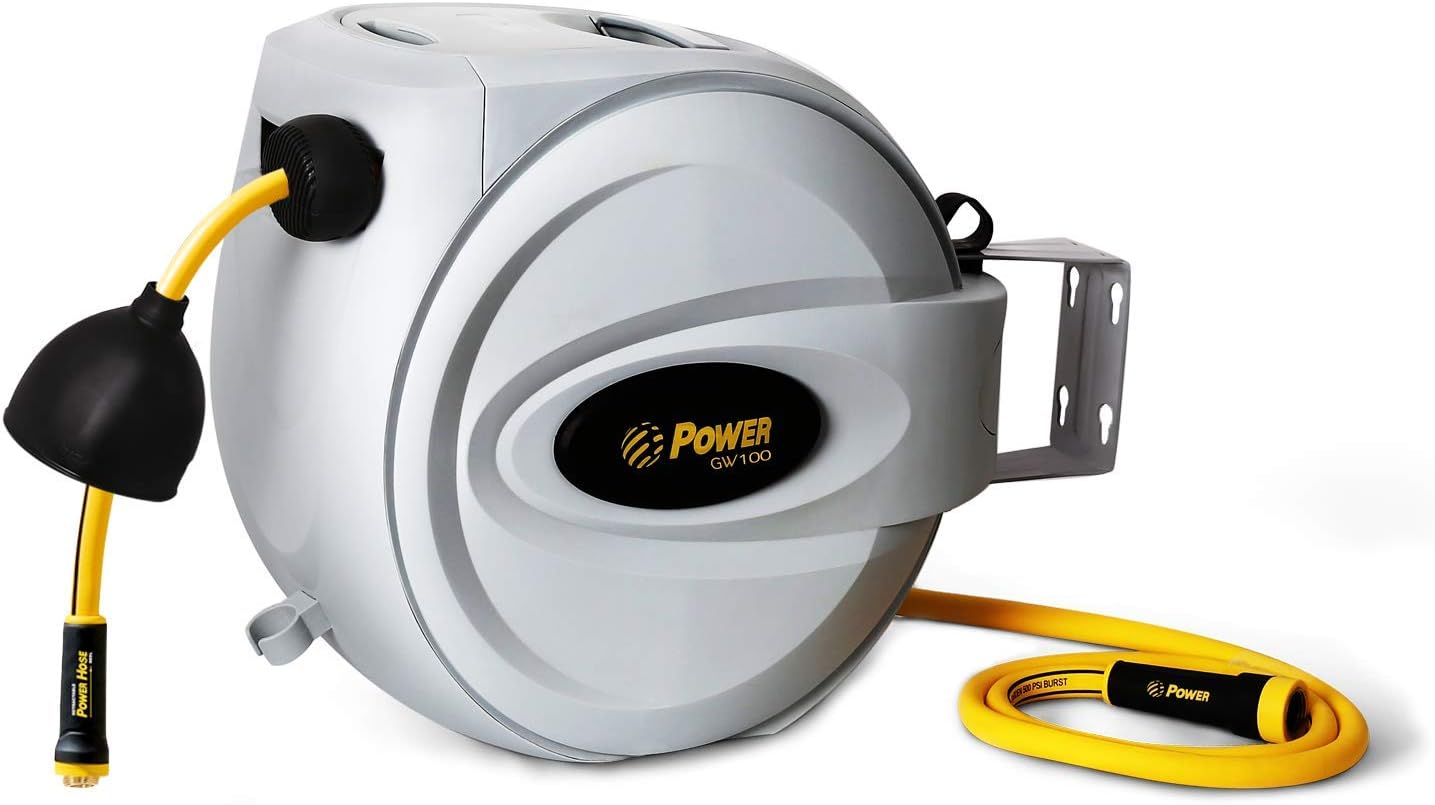 Using an automatic hose reel is a no brainer!

Both spring and motor-driven reels are much easier and convenient to use than hand cranks. However, you may still need to follow the basic principle steps to operate it but with much less effort now.

Even though the reel comes with a rolling mechanism, it is still best to follow the basic preps for safety and to optimize efficiency. That way, you can ensure that the machine will run smoothly. No kinks whatsoever.

For spring-driven reels, a little tug in the hose will release the locking mechanism. This then relieves the spring tension brought about by drawing the hose out of the reel. The said action causes the drum to automatically turn as the spring recoils back to normal. Your main part here is to guide the hose as the reel is rolling.

The same steps apply too with motor-driven hose reels. But instead of a simple tug, power buttons are being used to initiate the operation of the machine. The only thing left for you to do here is to assist the hose as the reel is winding in. That’s it!

What maintenance is necessary for my garden hose reel?

Most garden hose reels are generally maintenance free – yay! The only issue you need to be on the lookout for is if you live in a wintery area with bouts of extreme cold, which could cause freeze damage. In this case, simply purchase a hose reel cover to keep out the cold.

There you go! A garden hose reel is a simple machine with great benefits. You don’t need to be a scientist to operate this device efficiently. It is super easy to use and only requires minimal effort. And by following the steps we discussed above, anyone can be capable of handling it like a pro in no time!

In this article, we also discussed the benefits of an automatic garden hose reel, which is quite easy to use. Whether you prefer the normal reel or the automated one, we hope you found this article handy and that your garden is looking beautiful as ever (with no messy garden hose in sight!).